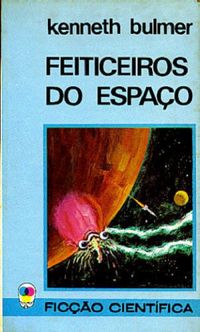 
The Wizards of Senchuria: Keys to the Dimensions Book 4 by Kenneth Bulmer (1969) '-'
Scobie Redfern was just a nice good-looking American young man who had never heard of such things as Portals, parallel worlds, and Trugs. So when someone materialized in his apartment with the Trugs in hot pursuit, it all seemed sort of a funny game. But there was nothing amusing about it once the monsters themselves arrived.

For it wasn't long before Scobie was himself running for his life from world to world and from Portal to Portal just to keep one jump ahead of the Trugs, and hoping that the Wizards of Senchuria might, just might, be able to get him back home alive and whole!

[Biographical Notes]: Kenneth Bulmer (1921 - 2005): Henry Kenneth Bulmer was born in London in 1921. He was a prolific author, writing over 160 novels under a bewildering array of pen names, and including adventure, historical and western novels, as well as TV tie-ins in addition to his prodigious science fiction output. He died in 2005.