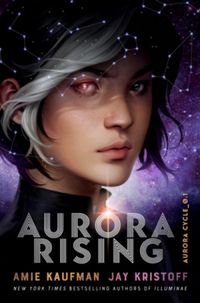 disappointing
I started to enjoy this book only after the 75% mark, and honestly i have no words to describle how i managed to finish.
To beguin with:
the world-building
->besides the beguining of the book overwhelming us with information that is, for the most part, useless, this world is boring, there's not a lot of ways to describe it, you've got two authors that have shown us time and time again that they are crazy talented, and the only thing they can come up with are humanoid alien creatures? really? and it's not only the alien species that are boring, but the techinology is nothing we haven't seen before.

the repetitiveness
->if i read another "maker's breath" or "son of a bicust" i might actually unalive mysel. WE GET IT, they have a new entity they belife in, fan-fucking-tastic, you don't have to tell us every 2 sentences that the Maker is able to breath, and Aurora already sound like a childish whinny baby(more on that later) and she can't even say a curse word? she's supposed to be 17 almost 18, i'm fucking 16 and i am more creative with swear words than her.
-> the same jokes: Aurora has a speaking cellphone, we undertood the first 15 times. MOVE ON

the problematic
-> racism: okay so we have 2 humanoid creatures, one of them has 'bone-white skin' and the other had 'golden skin with silver hair' and the ones with the white skin are friendly with humans and are mostly nerds and have a lot of technology and the one with darker skin are the savage, warriors/war-machines that killed each other and betrayed each other? really? and no one questioned that? okay, you think of that what you will.
->bad representation: we get it, Fin likes both men and woman, he's supposed to be read as bisexual but he (as is common to see in straight literature) never says he is bi or pan or omni just so that homophobic assholes can state that him being bi is not cannon, wow authors you're so brave (/sarcasm)
->femininity = sexual: the only female character that shows feminine characteristics is over-sexualized and has no other personality trait other than *wink wink* and being Tyle's sister, she screams 'woman written by a man' vibes

the characters
->Tyler Jones: he begins the book really well, being sarcastic and funny, i actually laughed in that first chapter because he was charming, i wanted to know more about his dad and his grief but at some point in the story he just lost all of that personality and became another forgettable character
->Zila: i don't even know her last name, she's forgetable at best and ignorable at worse, i liked the way her character developed by the end of the book, but it felt like too little too late
->Cat anger issues: she has no personality, she is simply the sarcastic one but with anger issues and every once in a while the author will remember she's supposed to be inportant and have some substance and throws the usual "dead mom" card and think that'll do it, it didn't do it. her ending was just shock vallue because the authors wanted the end to be thrilling.
->Fin: i like that he has a disability but that was handled in the way this book handle most things: by telling and not showing, he's always complaining about pain and all of that but it never actually impacts his life in any meaningful way, he's just sarcastic with abandonament issues and nothing else. we saw very little of his culture and what we saw was only used as a plot device.
->Scarlet Jones: the most infuriation character, she's the Face, she's supposed to know about all cultures and be fluent in all languages but for some reason she still depends on the alien boys to explain cultural things to her, besides being oversexualized everyone treats her like she's so badass and master manipulator but the only tatic she has is flirting, with man, always with man and always flirting and alwyas *wink wink* and always making the same jokes, i'm tired of hearing "bee-boo" or "baby brother" we undertood the first time, NEXT
->Aurora O'malley: nice how the first thing she does is erase her chinese name from the narative and adopt her white name, not sus at all. She's whinny and a baby and i get it, some people don't like to say cuss words but she does, she just for some reason don't and it's never explained, and then her character development was sudden and had no reason to exist.
->Kal: the only person in this story i love, i like how quiet he is but for some reason EVERYONE TREATS HIM LIKE SHIT BECAUSE OF THAT, just leave him alone, maybe he doesn't want to talk to you because you treat him like he might explode and kill everyone at any moment, and tbh, i wish he would, i like him speaking in his native language like it's his first instinct (a a bilingual myself, very relatable) and i like the little bit of his culture we see, i liked the way he handled the romance part of this story but i wish we had more of his POVs
-> overall: there's just too many characters and that makes it tiring.

the story:
-> boring for the most part, nothing really happens and what does happen is just too convenient (yes, saying that something is convenient in a book doesn't make it better, thanks), but i was intrigued by Aurora's purpose and powers and that was one of the only reasons i kept reading this book.

also: everyone saying this is a found family book: only after 75% and again, at that point, it felt like too little too late and also too sudden
gostei (7)
comentários(0)comente