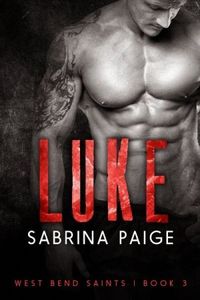 There are three things in life Im damn good at: f**king, jumping out of planes, and chasing forest fires.

Settle down? With someone like Autumn Mayburn? Forget it.

She's uptight, smart-mouthed, and hell, she has a kid. She's ten years older than me.

There are a million reasons I shouldn't touch her.

F**k all of those reasons.

The single mama with the smokin hot body and the sass to match is going to be mine.

Im a mom. A businesswoman. I have responsibilities.

The last thing I need is to get played by Luke Saint.

He thinks that just because he saved my orchard from a fire, he can tell me how to run it.

He thinks he knows what I need, what I crave.

The problem is, I think he might be right.

Books One and Two in the series are INCLUDED with your ecopy of Luke!! Each book in the series focuses on one couple, but if you want to understand the overall plotline involving the town of West Bend, make sure to read Elias and Silas' stories before you read Luke's!