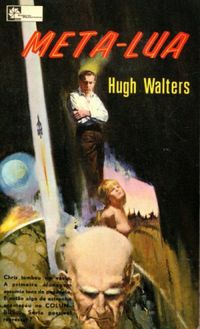 First on the Moon

First on the Moon

[Wikipedia] "Operation Columbus" is a juvenile science fiction novel, the third in Hugh Walters' Chris Godfrey of U.N.E.X.A. book series. Preceded by Blast Off at Woomera (1957) and The Domes of Pico / Menace from the Moon (1958). Followed by Moon Base One (1960). It was published in the UK by Faber & Faber in 1959, in the US by Criterion Books in 1960 under the title First on the Moon, and in the Netherlands by Prisma Juniores as 'Wedloop naar de Maan' 1963.

[Summary] The lunar astronauts of East & West clash in a deadly race for space...Both (America/United Kingdom and Russia) plan manned missions to the Moon to examine the wreckage of the structures destroyed in *The Domes of Pico*. The American astronaut, Morrison Kant, breaks his leg shortly before takeoff, so Chris Godfrey steps in. Both spacecraft arrive at the same time. Unlike Chris Godfrey, the Russian pilot, Serge Smyslov, is unable to leave his Lunar Rover vehicle and both head for the wrecked domes, leading to a tense standoff... The book predates the first use of a Lunar Rover by 11 years.
====
https://en.m.wikipedia.org/wiki/Blast_Off_at_Woomera
https://en.m.wikipedia.org/wiki/The_Domes_of_Pico
https://en.m.wikipedia.org/wiki/Operation_Columbus
https://en.m.wikipedia.org/wiki/Hugh_Walters_(author)
Hugh Walters (15 June 1910  13 January 1993) was a British writer of juvenile science fiction novels from Bradley in the West Midlands region of the United Kingdom. At the age of 47 he wrote his first book in secret under the pseudonym of Hugh Walters. He wrote 25 novels over a 40-year career. His books are still present on the Los Angeles Science Fantasy Society recommended reading list for children and young adults.

His first novels mostly dealt with the exploration of other planets in our solar system. Written for a juvenile audience, they had a scientific foundation, anticipating such advances as ion engines. Walters turned to writing novels concerning alien visits after all the planets had been explored. The main characters in his novels were two British astronauts, an American, and a Russian. Their names were Chris Godfrey, Tony Hale, Morrey Kant and Serge Smyslov, respectively. Later missions used a pair of telepathic twins, Gill and Gail Patrick, for communication. . .