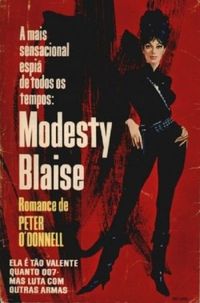 Modesty Blaise Series, #1 by Peter O'Donnell '-' Introducing England's Fabulous, Feminine Answer to James Bond Mystery!
In her first adventure for British Intelligence Modesty Blaise with her loyal lieutenant, Willie Garvin, must foil a multi-million pound diamond heist. They travel from London to the South of France, across the Mediterranean to Cairo before battling, against impossible odds, a private army of professional killers. |...| British Secret Service chief Sir Gerald Tarrant (Harry Andrews) recruits spy Modesty Blaise (Monica Vitti) to protect a shipment of diamonds to a Middle Eastern sheik, Abu Tahir (Clive Revill). The shipment has also attracted Gabriel (Dirk Bogarde), the head of a diamond theft ring that includes his henchman McWhirter (Clive Revill) and Mrs. Fothergill (Rossella Falk). Modesty thinks that Gabriel, who maintains a compound in the Mediterranean, has died, but he reveals himself to her. In Amsterdam, Modesty reunites with her former lover, secret agent Paul Hagen (Michael Craig), while her partner, Willie Garvin (Terence Stamp), is reunited with an old flame, Nicole (Tina Aumont). Nicole is killed by an assassin working for Gabriel. With Modesty and Willie on the run, they decide to steal the diamonds for themselves but Gabriel captures Modesty and forces Willie to steal the diamonds....

"In the beginning there was Modesty. Cooler than the pretentious James Bond, tougher than the brain-dead Mike Hammer." Lauren Henderson (Chained and Dead White Female).

[IMDb 1966 Film Storyline]: "Nothing can faze Modesty Blaise, the world's deadliest and most dazzlingly female agent!
Modesty Blaise (Monica Vitti), a secret agent whose hair color, hair style, and mod clothing change at a snap of her fingers is being used by the British government as a decoy in an effort to thwart a diamond heist. She is being set up by the feds but is wise to the plot and calls in sidekick Willie Garvin (Terence Stamp) and a few other friends to outsmart them. Meanwhile, at his island hideaway, Gabriel (Dirk Bogarde), the diamond thief has his own plans for Blaise and Garvin. Written by Dean Harris

[About the Author]: Peter O'Donnell created Modesty Blaise as a strip cartoon that was syndicated in more than 42 countries. The strip led to a series of novels about Modesty and her faithful lieutenant, Willie Garvin.