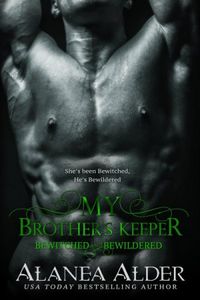 My Brothers Keeper (Bewitched and Bewildered #5)

Two hundred years ago Kendrick Ashwood had a premonition that showed him the gruesome image of his baby brother being killed in the line of duty while serving with the Alpha Unit. When centuries go by and Keelan is still alive and well, he begins to relax. He believes that his prayers sent to the Gods to make him wrong this one time have been answered.

As Kendrick feels his godsdaughters magic flare out of control he immediately merges with her in an attempt to rein it in. That is when he learns of the tragedy that has taken his only family away from him.

Using every resource at his disposal he immediately heads for Lycaonia to find out for himself who would be suicidal enough to harm his brother. What he finds shocks him to his core.

Anne Bennett gets a phone call that changes her life. Her new best friend Keelan has been hurt and his commander is asking her to move in to help take care of him. Her heart breaks when she hears from his family that the dreams she has been having of them together were shared by Keelan and that he was meant to be her mate.

Upon meeting Kendrick, her entire world is shaken. His more mature appearance and perpetual frown makes him look more like the man from her dreams than Keelan ever did.

As the Alpha Unit races to find the enemies who have stolen Keelans soul and covered Lycaonia in black magic, Kendrick begins to uncover dreadful truth behind the necklaces. When turning to Anne feels more natural than it should, Kendrick faces the fact that Anne truly is his mate.

As the paranormal world teeters on the brink of chaos, he finds himself protecting not his brothers mate, but his own.