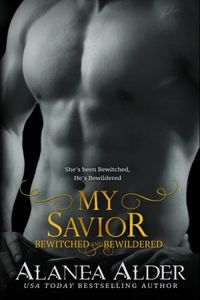 My Savior (Bewitched and Bewildered #4)

Amelia has dreamt of her mate since she was a little girl. All her life visions of a golden prince have warmed her heart and promised a fairy-tale future. She longs for the day when they will finally be together.

When the fateful day arrives and she meets Darian for the first time, she is nearly destroyed by his unequivocal rejection. His continued denial of their destined relationship has her doubting her own self worth and the visions she has had all her life.

Darian is teetering on the edge. He refuses to acknowledge Amelia as his mate and shadows continue to spread across his heart. He has grown used to the emptiness in his soul and almost fears the barrage of emotions she elicits. When an unexpected tragedy sends Darian spiraling into a hopeless abyss, will Amelia have the strength to pull him out, or will she succumb to her own darkness?