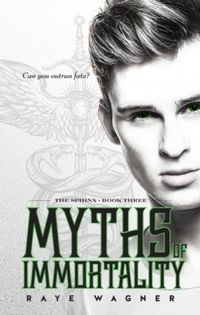 Myths of Immortality (The Sphinx #3)

In the realm of the dead, there are no lies. Hope Nicholas is desperate to believe that the truth will set her free from the bindings of Apollo's curse. But to get the truth, she must travel to the Underworld, a feat near impossible for the living. The gods there have their own agendas and, forced to forge alliances with the most unlikely allies, Hope will find that death is not the worst torment of the Underworld. Athan Michael spent months chasing Hope, only to have her disappear once again. And when he discovers her destination, he knows the treacherous journey to the Underworld is one he cannot take alone. Forced to put aside his past with Xan and Dahlia, the three demigods embark on their own quest. But the past will not stay buried, and Athan must decide how much he's willing to sacrifice to help Hope break the curse. Told in dual points of view, Myths of Immortality is a tense, action-packed story that will leave you begging for the next installment of The Sphinx series.