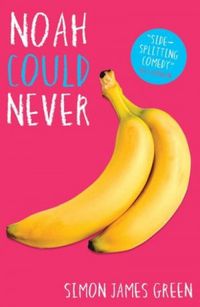 Noah Could Never (Noah Can't Even #2)

Noah and Harry are now officially boyfriends, but is Noah ready to go all the way? It's no help that a group of cosmopolitan French exchange students have descended on Little Fobbing - including sexy Pierre Victoire, who seems to have his eye on Harry! Meanwhile, Noah's paired up with a girl ... who, most outrageously, is not even French. But that's not all: the police are monitoring Noah, and he can't tell if it's because his dad and secret half-brother, Eric, have made off with his gran's fake diamonds; because his PE teacher is receiving mysterious cash infusions from Russia; or because drag queen Bambi Sugapops is hiding out at Noah's house in the midst of a knock-down, bare-knuckled drag feud. Will Noah ever catch a break?

Im an author and screenwriter and I sometimes do a bit of directing too. I actually did a Law degree at Cambridge University, but decided I loved writing and directing too much to go and be a lawyer. Ive worked on lots of West End shows including The Rocky Horror...