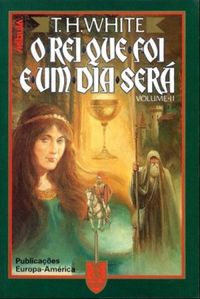 The Once and Future King

The Once and Future King

[Wikipedia] The Once and Future King is an Arthurian fantasy novel written by Terence Hanbury White. It was first published in 1958, and is mostly a composite of earlier works written between 1938 and 1941. The central theme is an exploration of human nature regarding power and justice, as the boy Arthur becomes king and attempts to quell the prevalent "might makes right" attitude with his idea of chivalry. But in the end, even chivalry comes undone since its justice is maintained by force.

The title comes from the inscription that, according to Sir Thomas Malory's Le Morte d'Arthur, was written upon King Arthur's tomb: Hic iacet Arthurus, rex quondam, rexque futurus  "Here lies Arthur, king once, and king to be."

Most of the book takes place in "Gramarye", the name White gives to Britain, and chronicles the raising and educating of King Arthur, his rule as a king, and the romance between Sir Lancelot and Queen Guenever. Though Arthur, if he existed at all, would have ruled some time around the 6th century, the book is set around the 14th century, and the actual monarchs of that period are referred to as "mythical". The book ends immediately before Arthur's final battle against his illegitimate son Mordred. Though White admits his book's source material is loosely derived from Le Morte d'Arthur, he reinterprets the epic events, filling them with renewed meaning for a world recovering from World War II.

The book is divided into four parts:
The Sword in the Stone (1938)
The Queen of Air and Darkness (1939) (published separately in somewhat different form as The Witch in the Wood)
The Ill-Made Knight (1940) (which mainly deals with the character Lancelot)
The Candle in the Wind (first published in the composite edition, 1958)
A final part, called The Book of Merlyn (written 1941, published 1977), was published separately following White's death. It chronicles Arthur's final lessons from Merlyn before his death, although some parts of it were incorporated into the final editions of the previous books.