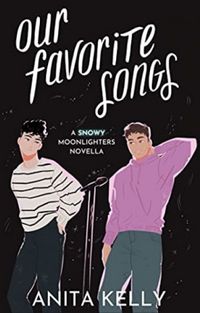 Restless and disillusioned with his life, Aiden McCarstle is ready for a night out at The Moonlight Café with his best friend Penelope: one night to not think about how much he hates grad school, to watch queer people make fools of themselves singing karaoke. A simple, reliable escape.

But when it's not Penelope who walks through the door at Moonie's, but the high school nemesis Aiden hasn't seen in five years--well, things get a little more complicated.

For Kai Andrews, moving back home after his mother's death has been harder and lonelier than he anticipated. And running into McCarstle again? That had certainly never been in his plans. But he deserves a night out, away from the responsibilities and grief that have been weighing him down. Sure, it appears McCarstle still hates his guts, for reasons Kai has never quite understood. But maybe, with a decent dose of pop music and Moonie's magic, Kai can finally, finally make Aiden smile. Just this once. Just for tonight.

As a surprising, intimate night at Moonie's brings Aiden and Kai closer together, a winter storm moves in. And what was meant to be a simple night out turns into over 24 hours of being snowed in together. Through confessions, memories, and games of Boggle, Aiden and Kai have to figure out if this unexpected second chance at connection was merely a temporary interlude--or if they can each come out better on the other side of the storm.