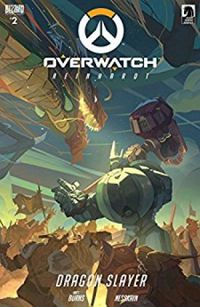 Justice will be done. Dragon Slayer, the second in our series of free digital comics, chronicles an adventure of Overwatchs knight of a bygone age, Reinhardt. An old soul whos spent most of his life on the battlefield, Reinhardt tirelessly continues his noble quest to fight for justice. When Reinhardt comes across a village thats being threatened by a vicious gang known as the Dragons, he picks up his massive hammer and does what any true knight would: protect those who cannot defend themselves.