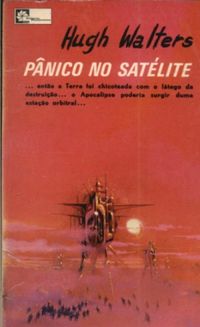 Terror by Satellite (1964) is a juvenile british science fiction novel, the seventh in Hugh Walters' Chris Godfrey of U.N.E.X.A. series. It was published in 1964, in the UK by Faber and in the US by Criterion Books. Later published in Portugal by Galeria Panorama under the name Pânico no Satélite.

[Wikipedia Plot Summary] Tony Hale, skilled engineer and amateur radio ham, smuggles a home-made transceiver on board an Earth-orbiting satellite during his tour of duty. This proves invaluable as the commander of the satellite, Hendriks, is a megalomaniac and demands to be made 'Dictator of the World'. To back up this demand, he begins destroying swathes of the Earth's surface using a radiation beam. The only secure link between the Earth and the satellite is Tony's radio.

[Reviews] The story is about a young space technician and his friend who foil the evil plot of their insane Space Station Commander. The young technician smuggles a ham radio onboard intending to furtively transmit to his friend on Earth. Once the Space Station Commander goes rogue, it's up to the plucky courage of the young men to defeat the mad scientist and save the Earth. . .