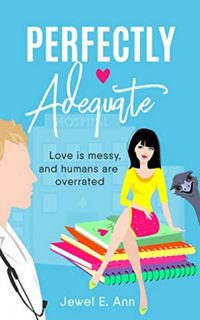 After his wife jumps headfirst into a midlife crisis, hes left with his young son, Roman, and a lot of unanswered questions.

That something turns out to be a someoneDorothy Mayhem, nursing student, patient transporter, reckless driver, and emu owner.

Dorothy studies humans, the neurotypical kind, through books and television. Then she emulates their behavioral patterns to fit in with her peers.

But nothing can prepare her for Dr. Elijah Hawkins.

Single dad.
Brilliant pediatric oncologist.
And the sexiest doctor at the hospital.

When his failed attempts at asking her out turn into a string of playdates with his son, Dorothy finds herself unexpectedly enamored with the boy and his father.

And thats a problem, a huge one, because Elijahs ex-wife is a famous plastic surgeonand Dorothys idol.

Perfectly Adequate is a beautiful, hilarious, and heart-felt journey along the human spectrum.