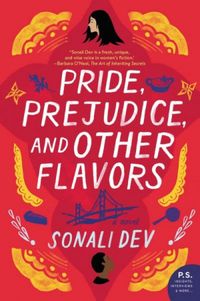 Pride, Prejudice, and Other Flavors

Pride, Prejudice, and Other Flavors (The Rajes #1)

Award-winning author Sonali Dev launches a new series about the Rajes, an immigrant Indian family descended from royalty, who have built their lives in San Franciscoa compelling, heartwarming romance between two strangers from completely different worlds, and a poignant exploration of cultural assimilation, identity, and the meaning of the word home.

Only in a family like the Rajes could San Franciscos most acclaimed neurosurgeon be considered the black sheep. Dr. Trisha Raje has developed groundbreaking technology and won the respect of her peers and the life-long gratitude of her patients. Still, her large, close-knit familydescended from old Indian nobilityhas certain rules to uphold. Trusting outsiders is frowned upon. Disloyalty of any kind is unacceptable. Trisha never intended to jeopardize her brothers political aspirations, yet her long-ago actions inadvertently did just that. At last she has a chance to turn that around.

Up-and-coming chef DJ Caine has known people like Trisha beforepeople who judge his background and find it lacking, who put pedigree above character. He may need the lucrative, career-making job the Rajes offer, but he has little time for Trisha, especially when he learns that shes the arrogant surgeon who wants to perform an untested procedure on his sister, Emma.

As the two continually clash, their assumptions shatter like spun sugar on one of DJs stunning desserts. Drawn to DJs steadiness, humor, and passionas well as his extraordinary foodTrisha begins to reexamine her view of the world, while challenging his beliefs about the nature of family. But theres a past to be reckoned with before they can hope to savor a future bursting with delicious possibility.

Award-winning author SONALI DEV writes Bollywood-style love stories that let her explore issues faced by women around the world while still indulging her faith in a happily ever after. Sonali lives in the Chicago suburbs with her very patient and often amused husba...