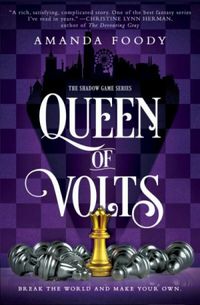 Queen of Volts (The Shadow Game #3)

Return to the City of Sin, where the final game is about to beginand winning will demand the ultimate sacrifice.

Only days after a corrupt election and brutal street war, one last bloodthirsty game has begun. The players? The twenty-two most powerful, notorious people in New Reynes.

After realizing they have no choice but to play, Enne Scordata and Levi Glaisyer are desperate to forge new alliances and bargain for their safety. But while Levi offers false smiles and an even falser peace to the citys politicians, Enne must face a world where her true Mizer identity has been revealedand any misstep could turn deadly.

Meanwhile, a far more dangerous opponent has appeared on the board, one plucked right from the most gruesome legends of New Reynes. As the game takes its final, vicious turn, Levi and Enne must decide once and for all whether to be partners or enemies.

Because in a game for survival, there are only losers