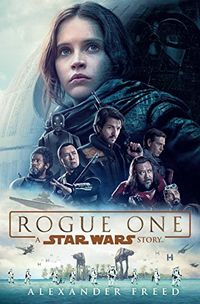 Rogue One: A Star Wars Story

As the shadows of the Empire loom ever larger across the galaxy, so do deeply troubling rumors. The Rebellion has learned of a sinister Imperial plot to bring entire worlds to their knees. Deep in Empire-dominated space, a machine of unimaginable destructive power is nearing completion. A weapon too terrifying to contemplate . . . and a threat that may be too great to overcome.

If the worlds at the Empires mercy stand any chance, it lies with an unlikely band of allies: Jyn Erso, a resourceful young woman seeking vengeance; Cassian Andor, a war-weary rebel commander; Bodhi Rook, a defector from the Empires military; Chirrut Îmwe, a blind holy man and his crack-shot companion, Baze Malbus; and K-2SO, a deadly Imperial droid turned against its former masters. In their hands rests the new hope that could turn the tide toward a crucial Rebellion victoryif only they can capture the plans to the Empires new weapon.

But even as they race toward their dangerous goal, the specter of their ultimate enemya monstrous world unto itselfdarkens the skies. Waiting to herald the Empires brutal reign with a burst of annihilation worthy of its dreaded name: Death Star.

Praise for Rogue One: A Star Wars Story

One of the best movie adaptations yet.Cinelinx

Rogue One bridged characters and elements of the prequels and original Star Wars trilogy in a visually stunning ride, but there are even more rich details hiding in the films novelization, [which] reveals and expands with inner monologues and character insights, political knots, and nuance.The Daily Dot