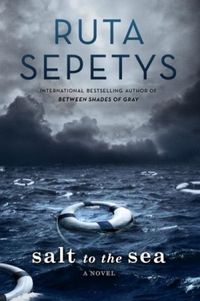 Salt To The Sea Ruta Sepetys

Salt To The Sea

Its 1945 in East Prussia. World War II is drawing to a close as Russian forces overtake the Germans, and thousands of refugees are on a frantic trek toward freedom, almost all of them with something to hide. Among the throngs of people seeking safety are Joana, Emilia, and Florian: each one borne of a different homeland, yet equally desperate to escape a life marked by brutality and war. As their paths converge en route to the Wilhelm Gustloffthe former cruise ship that promises each characters salvation and future just beyond the Baltic Seathe three are forced by circumstance to unite, and with each step closer toward safety, their strength, courage, and trust in each other are tested.

Yet just when it seems freedom is within their grasp, Russian torpedoes strike the massive ship. Not country, nor culture, nor status matter as all ten thousand people aboard must fight for the same thing: survival. Most will not make it.

Told in four alternating POVs, Ruta Sepetys delivers a masterful work of historical fiction inspired by the real-life tragedy that was the sinking of the Wilhelm Gustloff, the single greatest maritime disaster in history (far more deadly than the sinking of Titanic). Just as she did in Between Shades of Gray, Ruta unearths a shockingly little-known casualty of a gruesome war, and proves that humanity can prevail, even in the darkest of hours.

Resenhas para Salt To The Sea (3)