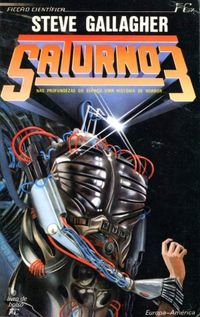 [From Wikipedia] Alone in Space, the horror has started... Saturn 3 is a 1980 British science fiction thriller film produced and directed by Stanley Donen. It stars Farrah Fawcett, Kirk Douglas and Harvey Keitel. The screenplay was written by Martin Amis, from a story by John Barry. Though a British production (made by Lew Grade's ITC Entertainment and shot at Shepperton Studios), the film has an American cast and director. Barry was set to make his directorial debut with the film, but he was replaced after shooting started, according to some reports due to a dispute with Kirk Douglas. Stanley Donen, who was already attached to the project as producer, replaced him. Two scenes that had been filmed for the production were edited out, due to Lew Grade objecting to the subject matter. These were a dream sequence that involved both Adam and Alex killing Benson and a scene where Hector ripped apart Benson's dead body on a table in one of the colony's laboratories...

[Plot containing Spoilers] 'In the distant future, an overcrowded Earth relies on research conducted by scientists in remote stations across the solar system. One of these, a small experimental hydroponics research station on Saturn's third moon, is run solely by Adam (Douglas) and his colleague and lover Alex (Fawcett). Adam, the younger Alex and their dog Sally enjoy their isolation, far from an overcrowded and troubled Earth. The couple have been on Saturn 3 for three years, but Alex has spent all her life in space. (...) Unknown to both Alex and Adam, Benson is a homicidal sociopath who murdered the captain originally assigned to Saturn 3 and took his place on the mission. Benson had actually failed a crucial test of psychological stability. As Benson uses the link to his brain to program the robot, Hector acquires Benson's homicidal nature and his lust for Alex. Hector initially kills Sally the dog and then assaults Benson, since it has learned about him being a murderer during the reprogramming process. Adam and Alex manage to disable the robot while it is recharging. Believing the danger over, Adam accuses Benson of gross incompetence and orders him to dismantle the robot and return to Earth when an eclipse ends. Benson obliges, but Hector is soon reassembled by the base's older robots. Resuscitated, Hector murders Benson while he is dragging Alex to his ship. Hector then blows up Benson's spacecraft before Adam and Alex can escape in it, trapping them all on Saturn 3 together. Overpowering the humans, Hector installs a brain link at the top of Adam's spine which will give the robot direct access to Adam's brain. Before Hector can make the connection, Adam destroys it, sacrificing himself by detonating explosives hidden on his person. In the final scene Alex, now alone, is shown aboard an Earth-bound spacecraft'.'