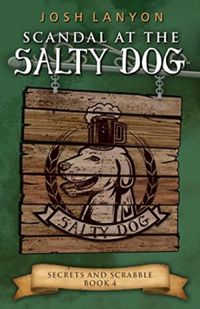 Scandal at the Salty Dog

Scandal at the Salty Dog (Secrets and Scrabble #4)

Who or what is haunting elderly recluse Juliet Blackwell, what does it have to do with mysterious goings-on at the Salty Dog Pub--and why is any of it mystery bookshop owner Ellery Page's problem? According to sometimes boyfriend Police Chief Jack Carson, it's not Ellery's problem, and Ellery should stop asking awkward questions before it's too late.

Ellery couldn't agree more, but it's hard to say no when someone is as frightened as old Mrs. Blackwell. Mrs. Blackwell insists the ghost of long dead pirate Rufus Blackwell has come to avenge himself on the last member of his treacherous clan.

Before Ellery can say, "Yikes!" Mrs. Blackwell takes a tumble down the grand staircase of her spooky mansion, and it's up to Ellery to find who is trying to kill his eccentric customer.