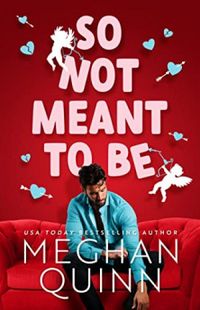 So Not Meant To Be

From USA Today and Amazon Charts bestselling author Meghan Quinn, comes a fresh take on a romantic comedy classic, When Harry Met Sally. This steamy, laugh-out-loud, enemies to lovers romance is about an annoyingly handsome coworker and the woman who refuses to be charmed by him.

Am I friends with JP Cane?

Besides the fact that hes adopted some far-fetched notion from the movie When Harry Met Sally that says men and women can't be friends and work together, its safe to say we're not friends. He's annoyingly loud, obnoxiously handsome, and has made an art out of poking all my hot buttons . . . multiple times a day.

So you can imagine how disgruntled I am when I not only have to fly to San Francisco with him for work, but stay in the same penthouse. Yup, we're sharing the same air, twenty-four-seven. We're talking full-fledged working roommates.

The man doesn't know what it means to wear a shirt, thrives off protein bars, and you guessed it, moans loud enough for people to believe he's Meg Ryan in a restaurant.

Spoiler Alert: I WON'T be having what he's having.

Tack on his continuous flirting and his polished good looks, and I'm caught staring down the barrel of a seductive temptation that makes it hard for me to sleep at night.

But guess who can control herself? This girl.

Because if there is one thing I know for certain, it's that JP Cane and I are so not meant to be.

Resenhas para So Not Meant To Be (7)

"For the rest of my life, I won?t stop loving you..."??
Jessie
5
This book get me out of a slight reading slump. And thanks God I read it. It was everything I needed. ? JP is this ht guy that fulfills all the boxes for a girl's perfect wet dream. But his also this ridiculous person who cries listening Adele - I LOVE EASY ON ME ? - quoting self motivation mantras. Important detail: This happened after being h0rny in a hilariously awkward situation ???. I saw myself in Kelsey more than I wish I had and just loved everything she achieved ... leia mais