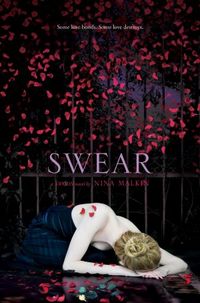 A promise broken. A bond betrayed.

It's been six months since ghost-turned golem Sinclair Youngblood Powers confessed his love, stole Dice's heart, and disappeared from Swoon, perhaps from existence. Despite the hurt, Dice has been moving steadily toward ordinary. Dreams of Sin still plague and pleasure her sleep, and the mark of Sin's love remains on her skin, still sore. But Dice has been throwing herself into music, finding solace in song and sometimes even in the arms of her band mate, Tosh. Life seems almostnormal. The last thing Dice wants is to mess with anything remotely supernatural. But when her best friend's boyfriend goes missing, Dice has no choice but to become very much involved. She knows that his disappearance was no accident, and it somehow has everything to do with Sin. Because Dice can feel it: Sin is back. And the promises and deceptions he left in his wake have returned to haunt him.

What do you do when an oath of devotion threatens to destroy the one you love?