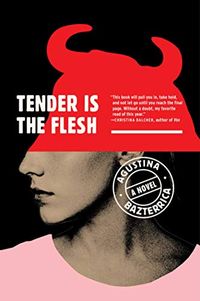 Tender Is the Flesh

The electrifying, award-winning, internationally bestselling novel about a dystopian world in which animals have been wiped out, humans are being harvested for food, and society has been divided into those who eat and those who are eaten.

Working at the local processing plant, Marcos is in the business of slaughtering humansthough no one calls them that anymore. His wife has left him, his father is sinking into dementia, and Marcos tries not to think about how he makes a living. After all, it happened so quickly. First, it was reported that animals had been infected with a virus and their meat had become poisonous. Then governments initiated the Transition. Now, human meatspecial meatis legal. Marcos tries to stick to numbers, consignments, processing.

Then one day hes given a gift: a specimen of the finest quality. He leaves her in his barn, tied up, a problem to be disposed of later. But she haunts Marcos. Her trembling body, her watchful, knowing eyes. Though hes aware that any form of personal contact is forbidden on pain of death, little by little he starts to treat her like a human being. And soon, he becomes tortured by what has been lostand what might still be saved.

From Agustina Bazterrica, one of Latin Americas most celebrated and original new voices, Tender Is the Flesh is propulsive and profound, a searing cautionary tale about the cost of consumption and the ties that bind and break us.

Resenhas para Tender Is the Flesh (42)