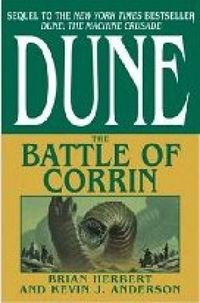 The Battle of Corrin

The Battle of Corrin

The Jihad offers hopes of victory over the sentient machines and peace on human terms to a war-scarred galaxy. Unfortunately, the machine leader Omnius conceives a final, desperate, and, coming from a machine intelligence, ironic plan: biological warfare that spreads devastating plagues across scores of human-settled worlds. Herbert and Anderson vividly depict the plagues effects, although given such a large cast of characters, some readers may feel the emotional impacts of particular characters fates are rather blunted. The action rises to a thunderous climax in the account of the Battle of Corrin, which occupies a good third of a long book but more than makes up for previous deficiencies in pacing. At the end, we understand why House Corrino sits on the imperial throne, why House Harkonnen is out of favor, why House Atreides is where it is, and why Ishmael has led the ancestors of the Fremen into the desert wastes of the planet known as Arrakis.

Resenhas para The Battle of Corrin (1)