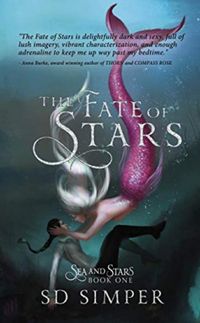 The Fate of Stars

"The Fate of Stars, the first book in the Sea and Stars trilogy, is delightfully dark and sexy, full of lush imagery, vibrant characterization, and enough adrenaline to keep me up way past my bedtime."
-Anna Burke, award winning author of THORN and COMPASS ROSE

A devout mermaid. A disgraced princess. A feud as ancient as the gods.

Worlds collide when Tallora is kidnapped from her ocean home and forced to be a pet to a tyrannical foreign empire. Her only hope for rescue lies with a sworn enemyPrincess Dauriel, infamous for her stone heart and conflicted past. But when Dauriels kingdom comes to the cusp of war, could their uneasy alliance be the key to defeating a common foe? Or will their growing feelings for each other lead them to ruin?

From the world of FALLEN GODS comes a tale of ancient magic and cutthroat politicsand finding redemption through love.

Resenhas para The Fate of Stars (3)

S D Simper has lived in both the hottest place on earth and the coldest, spans the employment spectrum from theater teacher to professional editor, and plays more instruments than can be counted on one hand. She and her wife share a home with their two cats and inn...