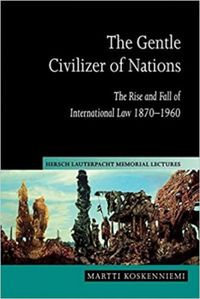 The Gentle Civilizer of Nations

The Gentle Civilizer of Nations

Koskenniemi traces the emergence of a liberal sensibility relating to international matters in the late 19th century, and its subsequent decline after the Second World War. He combines legal analysis, historical and political critique and semi-biographical studies of key figures, including Hersch Lauterpacht, Carl Schmitt and Hans Morgenthau. Finally, his discussion of legal and political realism at American law schools ends in a critique of post-1960 instrumentalism. This wide-ranging study provides a unique reflection on the future of critical international law