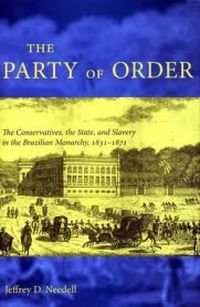 the party of order

the conservatives, the state, and slavery in the brazilian monarchy, 1831-1871

the party of order

the conservatives, the state, and slavery in the brazilian monarchy, 1831-1871

This study analyzes Brazil's monarchy, which adapted European ideas and practices to a creole plantation society that was traditionally based on African slavery. It focuses upon the Conservatives, who represented the sugar and coffee elites in reconstructing the new nation's state as a strong, representative, constitutional monarchy in troubled times. After the monarch himself assumed power, however, his views undercut parliamentary and party government, which were also sapped by regional differences and the pressure for state patronage. Increasingly, the emperor and his cabinets used state patronage and state authority to dominate politics. When the emperor decided upon gradualist abolition, Conservatives were unable to defeat it, despite its unconstitutional origin and imposition and its threat to the society and economy they represented. The legacy of an authoritarian, centralized political culture survived; that of a representative, constitutional regime did not. This book dramatically revises notions of the monarchy in terms of the social and ideological origins and nature of the Brazilian state, the role of the monarch, and the range and complexity of elite politics in the era.