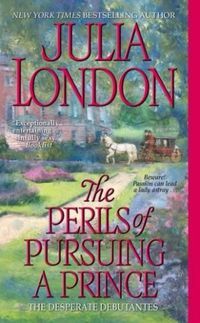 The Perils of Pursuing a Prince

The Perils of Pursuing a Prince

Lady Greer Fairchild's only hope of avoiding marriage to the first bidder lies in journeying into the untamed Welsh countryside in search of an inheritance she's not sure even exists -- one reportedly controlled by Rhodrick Glendower, Earl of Radnor, also known as the Prince of Powys. Rumor has it that the prince is rough, ruthless -- even a murderer. But Greer never imagined that the brute would refuse to let her leave his remote castle until she has proven her identity. Or that she would find herself powerfully attracted to this passionately virile man whose gruff demeanor belies a proud and sensual nature. The further Greer falls under his spell, the more determined she becomes to unravel the secrets of her Welsh heritage and the mystery surrounding the dark prince who dares her to become his wife and princess.

Resenhas para The Perils of Pursuing a Prince (2)