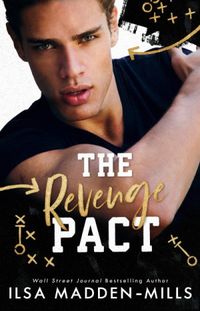 The Revenge Pact (Kings of Football #1)

River Tate is a god on campus.
The king of football.
A tattooed bad boy with gunmetal eyes that see right through you.
The only chink in his armor is HER, the girl he pretends doesnt exist, the forbidden one with the shy smile and lavender hair.

Anastasia Bailey is a nobody.
The queen of nothing.
An outsider with the face of an angel and a body made for sin.
The only chink in her armor is HIM, her boyfriends frat brother, the football player who hates her.

But when Anastasias life comes crashing down, Rivers the one who sweeps in and saves her.
Torn between loyalty, lies, and secrets, he battles the temptation to take everything from her when they make their revenge pact.

He cant tell her no.
Because revenge (or love) is sweet, and once you get a taste, the craving never ends.

The Revenge Pact is an angsty college sports romance with a beautiful HEA. No cliffhanger.