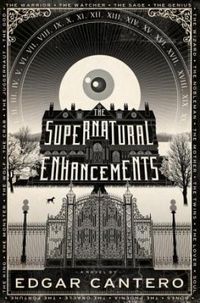 When twentysomething A., the unexpected European relative of the Wells family, and his companion, Niamh, a mute teenage girl with shockingly dyed hair, inherit the beautiful but eerie estate of Axton House, deep in the woods of Point Bless, Virginia, it comes as a surprise to everyoneincluding A. himself. After all, he never even knew he had a "second cousin, twice removed" in America, much less that the eccentric gentleman had recently committed suicide by jumping out of the third floor bedroom windowat the same age and in the same way as his father had before him . . .

Together, A. and Niamh quickly come to feel as if they have inherited much more than just a rambling home and a cushy lifestyle. Axton House is haunted, they know it, but that's just the tip of the iceberg when it comes to the secrets they slowly but surely uncover. Why all the suicides? What became of the Axton House butler who fled shortly after his master died? What lurks in the garden maze and what does the basement vault keep? And what of the rumors in town about a mysterious gathering at Axton House on the night of the winter solstice?