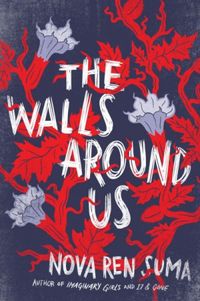 The Walls Around Us Nova Ren Suma

The Walls Around Us

The Walls Around Us is a ghostly story of suspense told in two voicesone still living and one long dead. On the outside, there's Violet, an eighteen-year-old dancer days away from the life of her dreams when something threatens to expose the shocking truth of her achievement. On the inside, within the walls of a girls' juvenile detention center, there's Amber, locked up for so long she can't imagine freedom. Tying these two worlds together is Orianna, who holds the key to unlocking all the girls' darkest mysteries.

We hear Amber's story and Violet's, and through them Orianna's, first from one angle, then from another, until gradually we begin to get the whole picturewhich is not necessarily the one that either Amber or Violet wants us to see.

Nova Ren Suma tells a supernatural tale of guilt and innocence, and what happens when one is mistaken for the other.

Nova Ren Suma is the author of the YA novels THE WALLS AROUND US as well as the YA novels IMAGINARY GIRLS and 17 & GONE, which were both named 2014 Outstanding Books for the College Bound by YALSA. Her middle-grade novel, DANI NOIR, was reissued for a YA audience u...