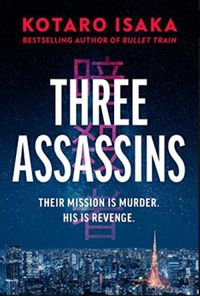 Three Assassins [ASIN : ‎ B09DKNC4QF ] '-' A propulsive new thriller from the bestselling author of BULLET TRAIN!
By the internationally bestselling author of Bullet Train, the high-octane new thriller, set in Tokyo's criminal underworld, pits an ordinary man against a group of talented and very unusual assassins Three Assassins is the high-stakes, high-style, and utterly propulsive follow-up to Kotaro Isaka's international bestseller, Bullet Train, a Crime Reads "Most Anticipated Book of 2021." Suzuki is an ordinary man until his wife is murdered. To get answers and his revenge, Suzuki abandons his law-abiding lifestyle and takes a low-level job with a front company operated by the crime gang Maiden, who are responsible for his wife's death. Before long, Suzuki finds himself caught up in a network of quirky and highly effective assassins: The Cicada is a knife expert. The Pusher nudges people into oncoming traffic. The Whale whispers bleak aphorisms to his victims until they take their own lives. Intense and electrifying, Three Assassins delivers a wild ride through the criminal underworld of Tokyo, populated by contract killers who are almost superhumanly good at their jobs.

THEIR MISSION IS MURDER. HIS IS REVENGE.
Suzuki is just an ordinary man until his wife is murdered. When he discovers the criminal gang responsible he leaves behind his life as a maths teacher and joins them, looking for a chance to take his revenge. What he doesn't realise is that he's about to get drawn into a web of unusual professional assassins, each with their own agenda.

The Whale convinces his victims to take their own lives using just his words.
The Cicada is a talkative and deadly knife expert.
The elusive Pusher dispatches his targets in deadly traffic accidents.

Suzuki must take each of them on, in order to try to find justice and keep his innocence in a world of killers.