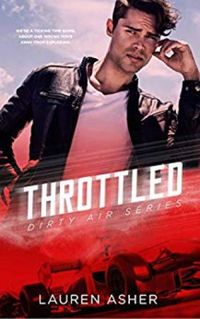 Formula 1 fans call me the American Prince.
I live for standing on Prix podiums while crowds chant my name, champagne drips down my face, and adrenaline rushes through my veins.

Women want to screw me while men want to be me. But no one challenges me more than Maya Alatorre.

The sister of my rival and new teammate.
A forbidden temptation.
And chaos wrapped with a bow.

We're a ticking time bomb, about one wrong move away from exploding. But with her, I want to trip the wire, detonating together in passion and pain.

My post-college plans include vlogging, drinking around the world, and following my brother as he races in every Grand Prix.

My brother's sworn enemy.
A damaged prince who acts like a villain.
And my secret crush.

His vulnerability breaks me down and holds me captive, ruining me for any man who dares to come after him. There's no point asking for my heart back because he'll shatter it before I have the chance.

Throttled is a standalone romance packed with action, steam, and banter.

Self-diagnosed with an overactive imagination, Lauren spends her free time reading and writing. Her dream is to travel to all the places she writes about. She enjoys writing about flawed yet relatable characters you cant help loving. She likes sharing fast-paced s...