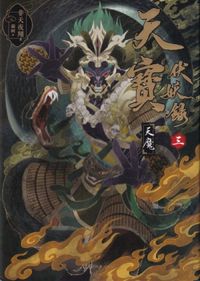 The phoenix led tens of thousands of birds as they flew over from the end of the horizon. Behind them, clouds akin to a sea of fire billowed as they swept by Chang'an. A golden winged roc perched on top of Xingqing Palace, its pupils reflecting the common people of the bustling Divine Land. Within the silence, dynasties rise and fall, while tides ebb and flow.

Li Jinglong slowly dragged his body riddled with wounds, releasing a resplendent light from his hand as he kept approaching Hong Jun.

"The living... are passing travelers..."

His low voice resounded through the world, and within an instant, the black fog that enveloped the earth receded before the light.

"The dead... return home without turning back."

That light is the blazing sun that illuminates the world, stars that twinkle in the night sky, an eternal heart lamp that pierces through the darkness.

"The world... is a temporary inn. Since time immemorial, countless people have bewailed their short, bitter lives..."

Li Jinglong closed his eyes and pressed one hand against Hong Jun's forehead. A white light diffused with a whoosh, covering the battlefield littered with mountains of corpses and seas of blood. Within the shadow of that lamp, the debauchery in Pingkang, the parasol trees of the Exorcism Department bathing in the midsummer sun, the sand and swirling snow in the vast expanse beyond the Great Wall, Ah Tai's clear singing voice, Mo Rigen and Lu Xu picking leaves in the early morning, Qiu Yongsi's flying brush strokes that transforms into immortal poems in Li Ba's cup-

A young nobleman of Chang'an strolled through its eastern downtown,

Riding a white horse with a silver saddle as he beamed.

While traversing through Chang'an, flowers kept falling, where on earth is he going?

Smiling, he enters a tavern where a foreign entertainer performs.

Fei Tian Ye Xiang is a Chinese webnovel author and screenplay writer, known for several of his titles such as Dinghai Fusheng Records, Tianbao Fuyao Lu and Bei Cheng Tian Jie. Currently, Tianbao Fuyao Lu is getting an animation adaptation from Bilibili, and Dinghai...