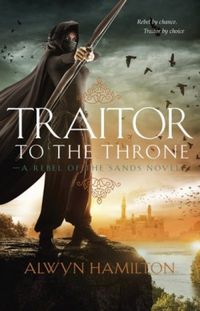 Traitor to the Throne

Traitor to the Throne (Rebel of the Sands #2)

Rebel by chance. Traitor by choice.

Gunslinger Amani al'Hiza fled her dead-end hometown on the back of a mythical horse with the mysterious foreigner Jin, seeking only her own freedom. Now shes fighting to liberate the entire desert nation of Miraji from a bloodthirsty sultan who slew his own father to capture the throne.

When Amani finds herself thrust into the epicenter of the regimethe Sultans palaceshes determined to bring the tyrant down. Desperate to uncover the Sultans secrets by spying on his court, she tries to forget that Jin disappeared just as she was getting closest to him, and that shes a prisoner of the enemy. But the longer she remains, the more she questions whether the Sultan is really the villain shes been told he is, and whos the real traitor to her sun-bleached, magic-filled homeland.

Forget everything you thought you knew about Miraji, about the rebellion, about Djinn and Jin and the Blue-Eyed Bandit. In Traitor to the Throne, the only certainty is that everything will change.

Resenhas para Traitor to the Throne (3)