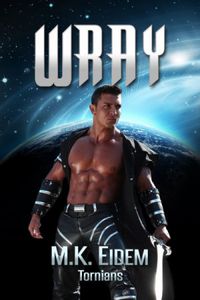 Emperor Wray Vasteri is the ruler of the Tornian Empire, his House has ruled the Empire ever since the great infection struck over five hundred years ago and he fears he will be the last. The number of compatible females is dwindling faster than anyone knows and if compatible females arent found soon their entire civilization will cease to exist. Its the reason he agreed to meet with Liron the Emperor of the Kaliszian Empire in Kaliszian space. The only reason they crossed paths with a Ganglian ship leaving Tornian space. The only reason the small female was discovered. Could she be what theyve been searching for?

Kim Teel has had a hard life, at least she thought she had until her parents were suddenly killed and her sister disappears. At nineteen she realizes shes been protected from all of lifes hardships, been taken care of her entire life, expecting and accepting it, shed been terribly spoiled. Determined to change her ways, Kim goes looking for her sister only to be captured by the Ganglians and it is then that she learns what happens to the unprotected females of the universe.

Wray finds himself drawn to the small female he finds beaten and abused on the Ganglian ship. She resembles a Tornian female but is much smaller. Could she be what hes been searching for? Wray and Kim are both doing the same thing, trying to survive. But what they find is that there are more important things then just survival. And once they learn that the universe changes forever.