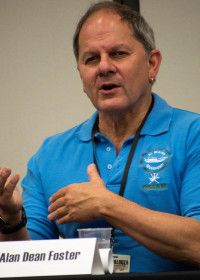 4.8
6 avaliações
LIVROS 55
LEITORES 4.534
SEGUIDORES 9
Gêneros Aventura,Cinema,Fantasia,Ficção científica,Horror,Não-ficção,Suspense e Mistério,Terror | Nascimento: 18/11/1946 | Local: Estados Unidos - New York - New York City
Bestselling science fiction writer Alan Dean Foster is an author of dozens of fiction and non-fiction works and has had his works in more than 100 books. He received a B.A. in Political Science from UCLA, Los Angeles in 1968 and a Master of Fine Arts in Cinema in 1969.

Foster's fiction includes science fiction, fantasy, horror, mystery and westerns. He has written non-fiction articles on film, science and scuba diving, as well as having produced the novelizations of many films, including Star Wars, the first three Alien films, and Alien Nation. He has also written The Damned series and the Spellsinger series, which includes The Hour of the Gate, The Moment of the Magician, The Paths of the Perambulator, and Son of Spellsinger, among others. Foster's love of exotic places has taken him to Europe, Asia, through the Pacific Ocean, and the back roads of Tanzania and Kenya. He has lived in Tahiti and French Polynesia.