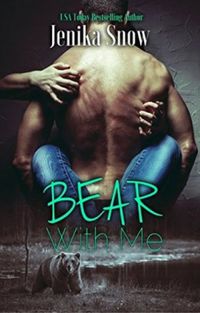 Bear With Me Jenika Snow

When my brother and his problems had me coming back to Stales, my hometown, I was scared not just for my twins health, but also because I knew Id run into Law, my bear-shifting ex and the sheriff of Stales.

Our breakup hadnt been grisly, but after nearly two years, the thought of seeing him again had everything tightening in me because  I still loved him.

But that was the past, and I knew I had to move on, right?

Brittin was the only woman I would ever love. She was it for me, even if she broke it off because of my domineering ways. I screwed up when I lost her, and I spent the next two years regretting it. But shed wanted space, and when she left for the city, I let her.

I just hope I havent let too much time pass, because not having Brittin in my life is a fate worse than death.

Resenhas para Bear With Me (2)