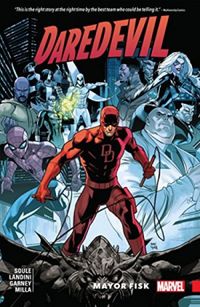 não informadoNew York City has fallen to Wilson Fisk, the Kingpin: Daredevil's greatest and deadliest adversary is now the city's newly elected mayor! And the stage is set for their most unbelievable showdown yet. Matt Murdock has the law, no fear and his incredible abilities in his arsenal - but Fisk has an entire city on his side. As mayor, he has declared Daredevil public enemy number one. With the police gunning for him, the Man Without Fear has nowhere left to hide - so what can one man do? If he's Daredevil, he can fight! What a time for Matt Murdock to receive the most incredible offer of his legal career!