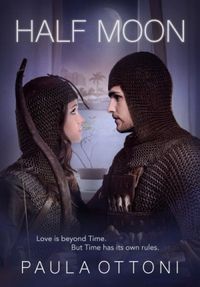 Time-travel, medieval knights, contemporary Florida and teenage problems in this sweet romantic comedy that is perfect for fans of Meg Cabot and Outlander.

Ever since sixteen-year-old Lucy Hernandez found out she can travel in time her life hasnt been the same. Now she has to regularly meet with Mr. Harris  a sixty-year-old historian with whom she shares a distant ancestor  as he is her time-travel master. On their missions, Lucy and Mr. Harris travel to different time periods so they can warn young Time Travelers about their powers and convince them not to go back in time under any circumstances, since changing past events can have catastrophic consequences.

In one of their missions, to the First Crusade, things go terribly wrong. The Traveler they are supposed to warn doesnt want to listen. His brother, a young knight called Liam Marshall, interferes to protect Lucy and she ends up accidentally bringing him to the 21st century.

Now that Liams younger brother knows about his special power, he plans on using it to make Liam not be born so he can be the only son and, therefore, inherit their fathers lands. To protect Liam, Lucy has to keep him hidden in her bedroom while her parents are traveling, at least until she, Mr. Harris and Liam can come up with a solution to the problem. But including a medieval knight in her routine in contemporary Florida and making him pass unnoticed wont be the easiest of the tasks. And things get even more complicated when she realizes she is falling in love with him