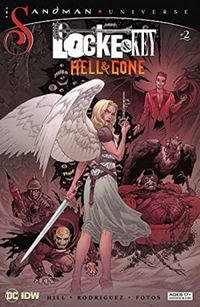 To win back her brother's soul from Hell, Mary Locke has done the unthinkable: she's seized control of the imprisoned Dream Lord's artifacts of power and crossed over into his place of power, the Dreaming! Unfortunately, she's managed to find herself in the middle of a war for the future of the kingdom, led by none other than the monstrous Corinthian...and even if she can survive that encounter, the road to Hell ends in locked gates guarded by Etrigan the Demon and the all-powerful Lucifer himself! Of course, the Locke family has always had a knack for making keys... The second and final chapter of DC and IDW's critically acclaimed crossover saga will change the way readers see the worlds of The Sandman and Locke & Key for years to comefor fans of either title, it's absolutely unmissable!