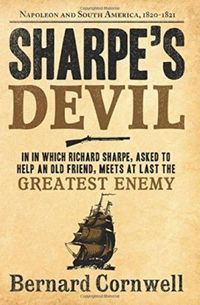 An honored veteran of the Napolenic Wars, Lt. Col. Richard Sharpe is drawn into a deadly battle, both on land and on the high seas.

The year is 1820, and military hero Richard Sharpe has quietly passed the years since the Battle of Waterloo as a farmer. Suddenly, his peaceful retirement is disturbed when he and the intrepid Patrick Harper are called to the Spanish colony of Chile to find Don Blas Vivar, an old friend who has vanished without a trace -- and who just happened to be the captain-general of Chile. Sharpe and Harper embark on a dangerous journey that carries themfirst to an unexpected interview with Napoleon, then on to Chile, a land seething with corruption and revolt. On land and at sea, Sharpe faces impossible odds, not only against finding Vivar, but against surviving in a time when tyranny rules, injustice abounds -- Napoleon lurks on the horizon, itching to rekindle the world in a blaze of war.