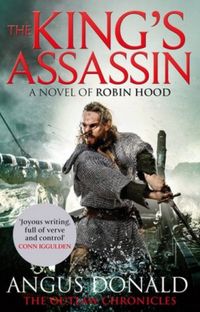 The King's Assassin (The Outlaw Chronicles #7)

The yoke of tyranny
King John is scheming to reclaim his ancestral lands in Europe, raising the money for new armies by bleeding dry peasants and nobles alike, not least the Earl of Locksley - the former outlaw Robin Hood - and his loyal man Sir Alan Dale.

The call to arms
As rebellion brews across the country and Robin Hood and his men are dragged into the war against the French in Flanders, a plan is hatched that will bring the former outlaws and their families to the brink of catastrophe - a plan to kill the King.

The roar of revolution
England explodes into bloody civil war and Alan and Robin must decide who to trust - and who to slaughter. And while Magna Carta might be the answer their prayers for peace, first they will have to force the King to submit to the will of his people . . .