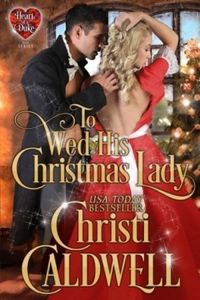 To Wed His Christmas Lady

The Heart of a Duke Book 7

The Heart of a Duke Series # 7

The Heart of a Duke Book 7

Shes longing to be loved:
Lady Cara Falcot has only served one purpose to her loathsome fatherto increase his power through a marriage to the future Duke of Billingsley. As such, she's built protective walls about her heart, and presents an icy facade to the world around her. Journeying home from her finishing school for the Christmas holidays, Cara's carriage is stranded during a winter storm. Shes forced to tarry at a ramshackle inn, where she immediately antagonizes another patronWilliam.

He's avoiding his duty in favor of one last adventure:
William Hargrove, the Marquess of Grafton has wanted only one thing in lifeto avoid the future match his parents would have him make to a cold, dukes daughter. Hes returning home from a blissful eight years of traveling the world to see to his responsibilities. But when a winter storm interrupts his trip and lands him at a falling-down inn, hes forced to share company with a commanding Lady Cara who initially reminds him exactly of the woman he so desperately wants to avoid.

A Christmas snowstorm ushers in the spirit of the season:
At the holiday time, these two people who despise each other due to first perceptions are offered renewed beginnings and fresh starts. As this gruff stranger breaks down the walls shes built about herself, Cara has to determine whether she can truly open her heart to trusting that any man is capable of good and that she herself is capable of love. And William has to set aside all previous thoughts hes carried of the polished ladies like Cara, to be the man to show her that love.