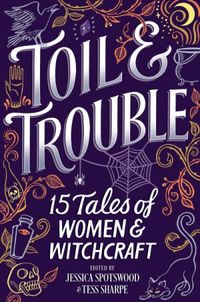 Are you a good witch or a bad witch?

A brujas traditional love spell has unexpected results. A witchs healing hands begin to take life instead of giving it when she ignores her attraction to a fellow witch. In a terrifying future, women are captured by a cabal of men crying witchcraft and the one true witch among them must fight to free them all. In a desolate past, three orphaned sisters prophesize for a murderous king. Somewhere in the present, a teen girl just wants to kiss a boy without causing a hurricane.

Tess Sharpe born in a backwoods cabin to a pair of punk rockers, Tess Sharpe grew up in rural California. Following an internship with the Oregon Shakespeare Festival, she studied theater at Southern Oregon University before abandoning the stage for the professiona...