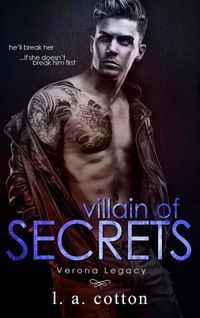 Nora Abato is the kind of girl people gravitate to.

She knows what she wants and shes determined to get it. And Nora wants her very own mafioso, the bad boy with a tortured soul who will do whatever it takes to protect his family.

Enzo Marchetti is the kind of guy people run from.

As the Marchetti crime family's new enforcer, hed rather spend his days getting his hands dirty than thinking about the future, or the girl with fire in her eyes and fight in her heart.

When a new enemy threatens the Marchetti empire, Enzo and Nora suddenly find themselves in close confines, and the undeniable connection between them is pushed to its limits. He cant resist the girl who sees past the darkness in his soul and she cant give up on the guy who has never been taught how to love.

Theres only one problem.

Enzo isnt Noras fairytale prince, hes the villain who will destroy her dream of a happily-ever-after.

If she doesn't break him first.

*Due to mature content that some readers may find distressing, this book is recommended for readers 18+