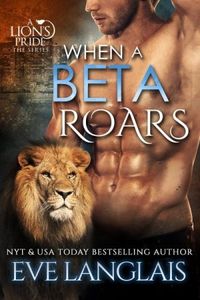 When a Beta Roars

How degrading. Stuck babysitting a woman because his alpha said so. As Pride Beta, he has better things to do with his time, like washing his impressive mane, hunting down thugs for fun, and chasing tail--sometimes his own if his lion is feeling playful.

But his babysitting job takes an unexpected turn when the woman he's assigned guard duty over turns out to be his mate.

A female threatened by an outside wolf pack.

A woman he wants to call his own.

A mate who doesn't fall for his charm.

Usually Beta's leave the roaring to the Pride's alpha, but in this case given his level of frustration, he might have to make an exception. And if anyone doesn't like it, they can kiss his furry tail.

Resenhas para When a Beta Roars (2)

Hello, my name is Eve Langlais and I am an International Bestselling author who loves to write hot romance, usually with werewolves, cyborgs or aliens . I should warn you, I have a twisted imagination and a sarcastic sense of humor something I like to le...