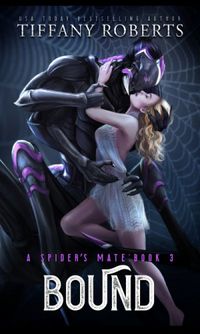 Ketahn will protect his mate at any cost.

Queen Zurvashi will not rest until everything Ketahn cares about is gone and he belongs to her.

His sweet, compassionate Ivy, his sister, his friends, his new tribe of humansall are in danger. He fears nowhere is far enough away to escape the queens wrath.

But Ketahn will see the whole jungle burn before he lets any harm befall his mate. Even if he must stand against Zurvashi and her army, even if he must face every beast in the Tangle, even if he must defy the gods themselves, he will not surrender his female.

Ketahn and Ivy are bound, and no force in the universe will sever the threads that connect them.
-----
Book 3 of 3 in The Spider's Mate Trilogy.
Warning: Contains darker themes of violence, death, and S/A.