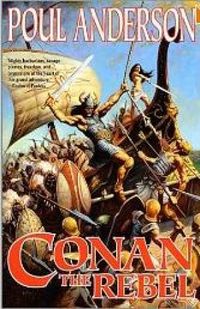 Fans of Robert E. Howard's immortal barbarian will rejoice in this handsome reappearance of Anderson's classic 1980 pastiche of favorite Howardian images. Familiar highlights include wizards, especially Tothapis, worshiper of the serpent god Set; an asp ("crushed underfoot"); a cobra ("no trick to wriggle by them"); a viper's "articulated skull hung in a chain" about a wizard's neck; even a mighty battle with a dragonlike flying reptile. And of course, beautiful damsels Conan's beloved Belit, Daris, the witch Nehekba all of whom love Conan (for his part, he's "never reluctant to shine before an attractive woman"). The Cimmerian himself, however, acts like a CEO for the first half of the story, content to embrace and counsel Belit in a laid-back, laconic manner. When Falco, a young nobleman, praises a woman, Conan replies, "Never mind her body. Tell me about her business." He even philosophizes: "Strife was the natural order of things." Fortunately, after discovering the potent Axe of Veranghi, he recovers his normal barbaric poise. He wields the axe with full fettle, dismembering opponents, including armies of the dead riding on weird monsters, but still lovably gullible, he allows the dangerous Nehekba to delude him. Disappointingly, Conan never really rebels against anything in particular, and Anderson's version hardly lives up to Howard's incomparable creation (to be fair, Howard's often didn't, either). Fans will applaud anyway.