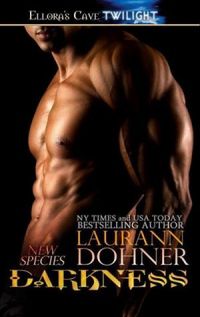 Kats boss wants dirt on the NSO. She is sent to Homeland undercover but everything goes wrong as soon as she enters the front gates. She is arrested by a big, powerful, sexy New Species but she is not frightened. He turns her on and things heat up fast between them. Now, she just hopes he does not break her heart.

Darkness admires Kats courage but he cannot trust anything she says. He hasnt been with a female for years because he knows he is too damaged. He is not mate material, despite his desire to possess her in every way. Darkness fears losing controlthe one thing that defines his life. He doesnt think he can tear down the protective walls hes built, even for her.

Inside Scoop: Kat never realized how much fun handcuffs and dominant males could be until she discovered her kinky side through Darkness need for control.

I had a rather short area here telling a little about me but then I had more than a few people ask me to expand it so... here goes. LOL. I'm a full time home 'supervisor' which is a nice word for saying I'm a housewife. I'm married happily, I met my dream guy 20 ye...